What is Bluefield Housing?

‘Bluefield Housing’ is both a land definition and an infill housing model, each created by Damian Madigan as an extension to the widely-understood definitions of Greenfield, Brownfield and Greyfield Housing. Damian is currently authoring the book Bluefield Housing as Alternative Infill for the Suburbs, to be published by Routledge New York.

"Bluefield" housing uses the existing fabric of widespread single-lot housing to create more resilient, sustainable and inclusive dwellings within our suburbs, where most people live.

As a land definition, Bluefield refers to established suburbs of a city without stated densification policies or targets. As a housing model, the Bluefield approach sees existing housing stock and landscape retained and incorporated into new infill housing developments as an alternative to Knock-Down-Rebuild (KDR) development. Based upon the discoveries of his 2016 ‘Alternative Infill’ PhD thesis and follow-on design research projects, Bluefield Housing was first defined and described in Damian’s shortlisted design competition entry for the AA Prize for Unbuilt Work 2021.

At its heart, Bluefield Housing is about increasing housing diversity and choice while retaining and enhancing neighbourhood character: infill that is low scale, low intensity but high impact.

Each of these models, along with transit corridor apartment development, aim for density increases without negatively affecting the more established and character-laden parts of a city. However, these older ‘no-go’ suburbs nonetheless continue to face character and amenity pressures through ad-hoc redevelopment, whilst the avoidance of strategic change leaves them homogenised.

Why ‘Blue’field? Associated with calmness, stability and tradition, blue represents the perceived immutability of established suburbs, while ‘blue chip’ acknowledges the values – both financial and emotional – in play.

The Bluefield Housing approach, underpinned by conceptually rigorous and multi-layered design research investigations, sees single allotments in older suburbs sensitively densified by using the tropes of suburban alterations and additions – the mainstay of practice for so many architects and a vital contributor to the global construction industry. Rather than reading a site as divisible into pre-determined minimum allotments, a Bluefield approach treats the existing housing, new additions and private open space holistically, offering opportunities for ageing-in-place, working from home, build-to-rent, multi-generational and cooperative living in established suburbs where housing diversity is elusive, yet so desperately needed.

Design research projects that utilise the Bluefield Housing model include:

Damian is currently working with the South Australian State Government on policy development to determine how the Bluefield Housing model might become a form of permitted infill development under the new state-wide Planning and Design Code.

'Ageing Well in the Bluefields', an Architecture Australia article written about the housing model and its use in the Cohousing for Ageing Well project, can be read online at Architecture AU. 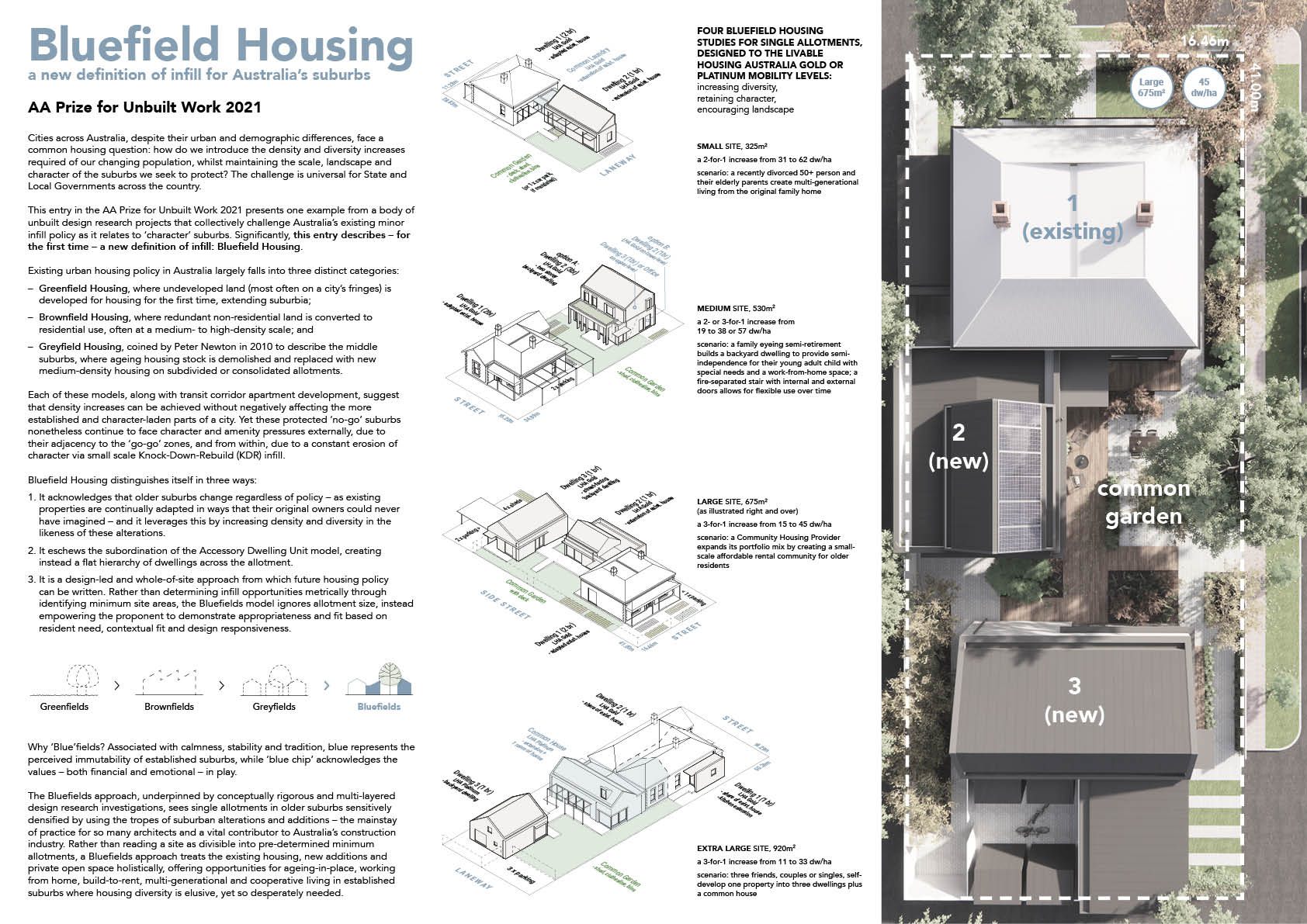 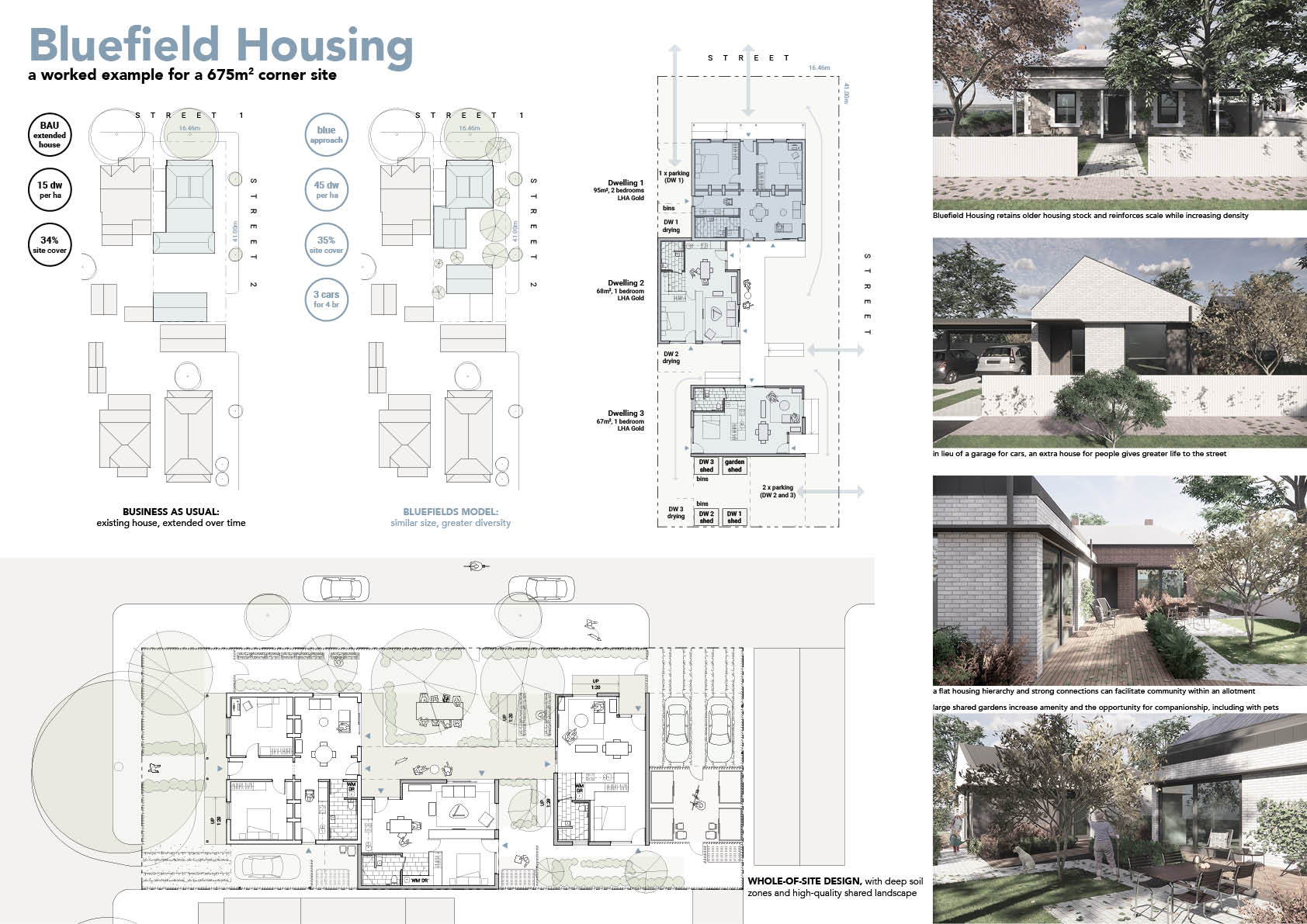